This clock is located in Brockwell Park. When I first saw it, I thought it was a funny relic. It was old and the time was stopped. I felt like taking a picture beside it but because I didn't have a mobile phone with a photo machine yet, I took my laptop to the park, to take a picture with the Photo Booth application. My flatmate told me it was dangerous to go to the park with a laptop, as there were some thieves going around there, looking for possessions. I did it anyway but I was a bit worried that someone would steal it. I left the computer over one of the park benches and I run near the clock whilst the machine was automatically taking pictures. A black man was sat in another bench, staring at me and at my computer and so I thought about him as a potential thief. Suddenly, he started talking to me, asking what I was doing. After I explained, he pointed to a sign on the back of the bench where he was sat and the name of a woman was engraved there. He said it was his wife's name, and that she had already left this world. He told me she used to sit there all the time, to look at the clock. She was in love with it. Then he told me he used to be the Mare of that area (Dulwich). He also told me that the clock was an exact replica of Big Ben and said that it was about to be renovated and that it would have his wife's name in it. This picture was taken after the clock was renovated, and the time wasn't stopped anymore. 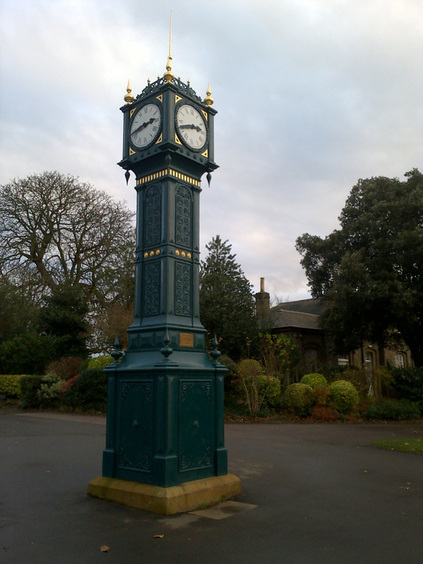